Tweepy is a "wrapper" written in Python that makes it easier to work with the Twitter API.

You can install it on your own system by going to your Terminal/command-line and typing in:

(if you've already done this, you can go ahead and do it again and create a new app. Or just use your old credentials)

Assuming you've already created a Twitter account, the next thing you need to do is register an "application" with Twitter. You're basically telling Twitter that you want to create a new app/interface/site using Twitter data, and so you need to go through Twitter's authentication process.

Note that this is not specific to using Tweepy, this is the standard process needed for any third-party code/app to call Twitter on a user's behalf. Once you go through this process, you can use the credentials for any other program you might write.

Setting up the app

Fill out the fields, scroll to the bottom, read the Developer Agreement agree to them, and then click the Create your Twitter application button.

If you plan to send tweets via the command line, change the Access level to Read and Write

Now click the Keys and Access Tokens tab (near the beginning of the page) and you should see this: 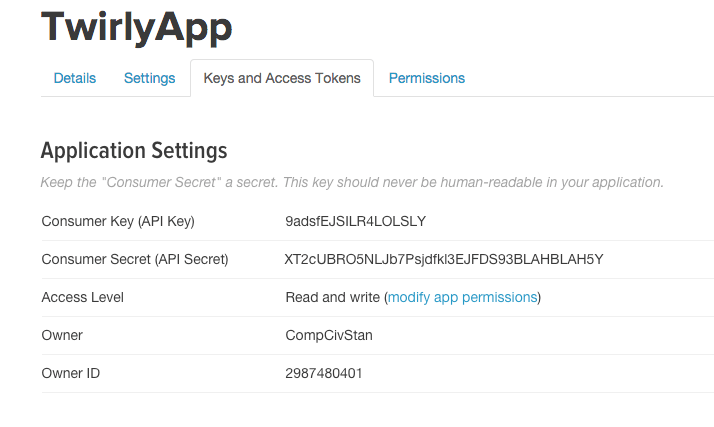 Scroll down until you see the subheading, Your Access Token. 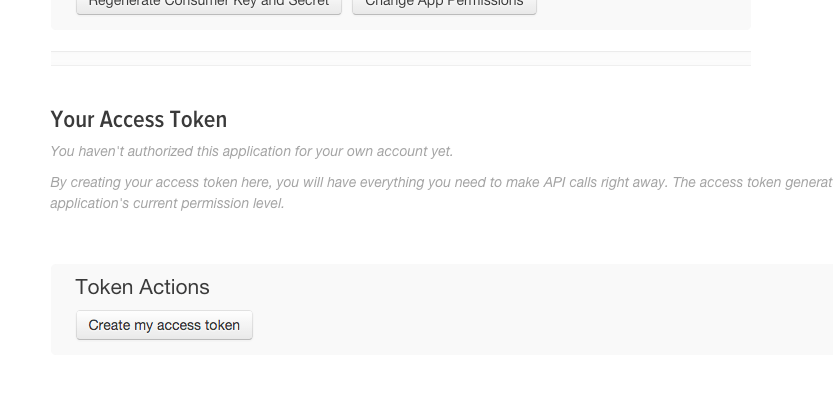 Click the Create my access token button, which should cause a page refresh of the settings page. Below is a screenshot and the highlighted fields that you need to copy for the next step: Consumer Key (API Key), Consumer Secret (API Secret), Access Token, and Access Token Secret

The easiest way to do this is to start up iPython from the command-line, so you can play with the commands interactively.

From the Tweepy docs, I've adapted code from the intro.

Once that api variable has been set to the object returned by tweepy.API(auth), you're free to make some Twitter API calls. To print out the last 20 tweets by @Stanford:

If these commands work, then you're all set up with Twitter and Tweepy. We'll expand on the use cases in other tutorials. Some of the extensions will be quite simple, such as making the authentication process a one-line command.